Skip to main content
Home / Writing Tips / What are the Common Errors While Writing an Essay? 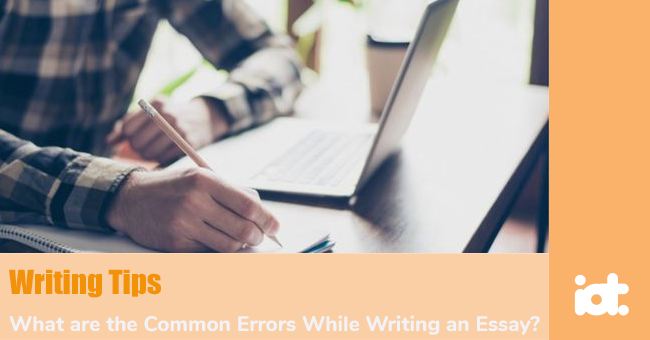 Essay writing in IELTS is troublesome for many students who repetitively make mistakes of one or the other kind and hence struggle to get their target band score in writing. By merely working on those committed mistakes and by just to avoid repeating them, you are able to write an essay effectively.

Following are some of the common errors that candidates appearing in IELTS often make while writing an essay:

Though the instruction regarding word limit is clearly written in the essay question, it is usually ignored by the students. Rather, some students do not even bother to count the number of words in their writing tasks. So, the result is that they do not even write the minimum number of words. The word limit for writing an essay is minimum 250 words and you need to strictly ensure this, otherwise it would lead to reduced band score.

While you must write at least 250 words, you should also not write excessively. Writing longer essays indirectly cost your marks. Actually, for two reasons, we should not be writing longer essays. One reason is that the more you write, the more grammatical mistakes you are likely to make and hence, it would lower your band score. Hence, you should write precisely! The other reason is that you would not be able to complete the essay on time or if complete it, you may not get the time to review it.

If the case is that you lack in terms of task response, it is a big issue in your essay such as not writing your opinion in the essay question which asks for your personal opinion, missing one or the other part of the essay question e.g. if the question is to discuss both views, one view is completely not described in the body paragraph or one view is comparatively described more in length when you have to write both equally as per the question.

One of the myths associated with writing an essay a student carries in his mind is that essay writing requires you to write a number of ideas and that the more you write, the better it is. This is wrong! You should rather focus on explaining and extending the ideas that you have mentioned in your body paragraph.

For example, if you are writing a paragraph on reasons, mention one point as reason and then explain how it is the reason along with supporting that reason with an example.

Copying the Essay Question in Introduction

Some students are in the habit of copying the question the way it is written rather than re-writing it. Introduction is the part where you need to paraphrase the question but if you instead copy the complete statements from the question, the examiner will not count those words and hence, you will get penalized for writing less number of words. Therefore, understand the essay question first and then try to rewrite it in your own words.

It is more habitual with the students to write ideas, in general, without supporting them with examples. Writing example is an important element of your essay and hence, it should not be ignored at all. It is good to write an example along with 2-3 ideas you have described in the body paragraphs. Apart from this, example should be written as per your knowledge and experience, keeping the tone as academic.

For example, rather than writing “Yesterday, I found a person committing a crime who got caught by the policeman” as example in the body paragraph, we can write “The one who commits crime gets punished by the police”.

It is quite common that when students are practicing essays, they give more emphasis on content and ideas in body paragraphs, and hence unintentionally, they do extend conclusion also in the same way they write body paragraphs. You should keep in mind that conclusion has to be shorter in length and should not look like a fully developed body paragraph.

Following is an example of overusing connectives (highlighted below),

To begin with, technology is changing day by day and thus, bringing positive changes in the life of mankind. Moreover, it has revolutionized the way humans used to work earlier.

Students with casual approach towards writing or those who are not aware of the IELTS writing format, complete their writing tasks in informal tone the way they speak informally. It should be strictly noted that you should write essay in academic tone and style, rather than writing as if you are talking to somebody or the way an interactive blog is written.

While practising the writing prompts, keep all the points in your mind. Your writing will improve allowing you to score higher band score in IELTS.

Overpopulation of urban areas has led to numerous problems.

The total time allowed for the IELTS Academic/GT Writing test is 60 minutes.