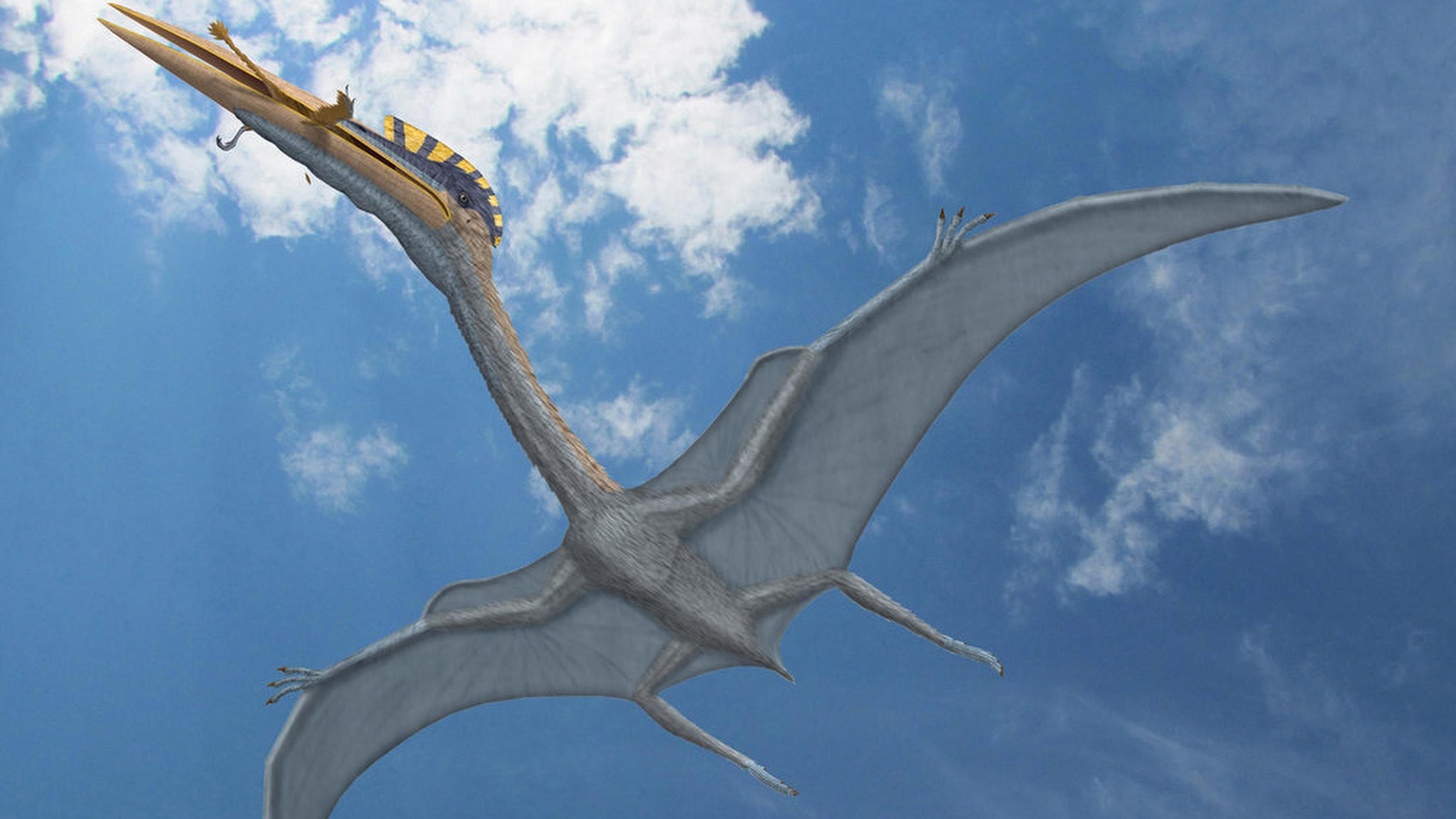 IELTS Academic Reading Practice #1: How Pterosaurs- a prehistoric predator took to the skies

Spreading its vast wings wide, the pterodactyl catches the breeze and takes to the air. On the back of a fierce spring wind, it soars above grassy verges and muddy streams, gliding in and out of pockets of tall deciduous trees. With a wingspan of five metres, it is on a completely different scale to any insect, bird or animal in its path. As it slows, coming in to land on a patch of soft earth, the sound of a human cry echoes in the hills.

But this is not Pangaea, the prehistoric land-mass that existed long before the earth's current continents were formed. This is Newmarket, just off the A14 outside Cambridge. And, unlike the dinosaurs who collectively roamed for more than 150 million years before meeting their maker, this creature's excited creator is standing right there as it lands. "I've been working on pterosaurs for about eight years now," says Dr Matthew Wilkinson, a professor of zoology at Cambridge University. With a team of model-makers, he has built this remote- controlled pterosaur (as pterodactyls are also known) in his Cambridge studio. "I've always been interested in how they flew, being such a large size. I thought the real test would be to actually build a pterosaur and fly it."

The model is the size of an adult anhanguera, a subspecies of pterodactyl named after a town in Brazil where several beautifully preserved specimens have been found. "There is a forewing membrane in front of the main wing - a big flap essentially, which goes up and down," Wilkinson says. "The idea is that that might have been able to act a bit like the flaps of an aircraft, so it's a high- lift device, which would enable it to slow down on landing." Pterosaurs - from Greek and meaning «winged lizards» are among the least understood of all the early archosaurian reptiles. They existed from the Triassic period, 220 million years ago, to the Cretaceous period, when South America pulled away from Africa and the South Atlantic was formed.

They tore through the skies, feeding on fish and small creatures, while the dinosaurs - a term reserved for terrestrials - dominated the land. We know that pterosaurs were among the first vertebrates to fly, but scientists have never quite understood their flight technique. How, they wondered, did a creature of such bodyweight ever manage to take off? How can a wing that appears to have been supported by fine, hollow bones have carried this weight? How did such huge creatures take to the skies without risking high-speed collisions?

Then came the discovery of a site in Brazil's Araripe basin, now known as the Santana formation. Here, not only were hundreds of fossils of amphibians and reptiles found, but archaeologists unearthed a number of very well preserved pterosaurs. The Anhanguera - a fish-eating sub-species that ruled the skies of South America in the Cretaceous period, 120 million years ago - was among them.

With the Anhanguera fossil as his model, Wilkinson began gradually reconstructing the skeletal structure in his Cambridge studio. "That was quite a find," he says. "It's very unusual to find three-dimensional pterosaur fossils anywhere. Their bones are usually crushed to dust when we find them." The material inspired him to make a robot version as a way to understand the animal's locomotion. Other scientists are doing similar things with other prehistoric beasts. Last month, for instance, Swiss scientists announced that they had built an amphibious robot that could walk on land and swim in water using the sort of backbone movements that must have been employed by the first creatures to crawl from the sea. Unlike bats or flying squirrels, pterosaur wings - soft, stretchy membranes of skin tissue - are thought to have reached from the thorax right to the ankle, reinforced by fibres that stiffened the wing and prevented tearing. Small sub-species flapped their wings during take off.

That may have explained the creatures' flexibility, but it did not answer the most pressing question: how did such heavy animals manage to launch themselves into the sky? Working with researchers in London and Berlin, Wilkinson began to piece together the puzzle. It emerged that the Anhanguera's secret weapon was an elongated limb called the pteroid. It had been thought that the pteroid pointed towards the shoulder of the creature and supported a soft forewing in front of the arm. But if that was the case, the forewing would have been too small and ineffectual for flight. However, fossils from the Santana formation showed that the pteroid could have faced the opposite way, creating a much greater forewing that would have caught the air, working in the same way as the flaps on the wings of a jumbo jet.

So, with both feet on the ground, the Anhanguera might have simply faced into the wind, spread its wings and risen up into the sky. Initial tests in wind tunnels proved the point - models of pterodactyls with forward-facing pteroids were not only adept at gliding, but were agile flyers in spite of their size.

"This high-lift capability would have significantly reduced the minimum flight speed, allowing even the largest forms to take off and land without difficulty," Wilkinson says. "It would have enabled them to glide very slowly and may have been instrumental in the evolution of large size by the pterosaurs, the biggest of which had wingspans of up to 12 metres. The leading-edge flap could also have functioned as a useful control surface in flight."

Resting in the grass at the test site, nestled among brambles and dandelions, the model's red-tipped wings ripple slightly in the wind. In flight, the flexible membrane, while much stiffer than the real thing, allows for a smooth takeoff and landing. But the model has been beset by other mechanical problems. "Unlike an aircraft, which is stabilised by the tail wing at the back, [the model] is destabilised by its head, which means it can start spinning around. That's the most problematic bit as far as we're concerned," Wilkinson says. "We've had to take it flying without the head so far." When it flies with its head attached, which should be very soon, Wilkinson will finally have proved his point.

So what's next for the zoologist - a full-size Tyrannosaurus rex? No, he reassures me: "We're desperate to build really big pterosaurs. I'm talking creatures with 12-metre wingspans, weighing a quarter of a ton. Nobody really understands how they worked yet. "But," he adds, just as I begin to fear for the mental health of pilots landing near by at Cambridge City Airport, "it would be nice to build some of the smaller, flapping pterosaurs as well." Cambridge University has published a pod cast by Matthew Wilkinson, called 'Dinosaur Detective', about the flying pterosaur replica
Pterodactyls: the facts.

In the 1970s, North American scientists unearthed the largest pterodactyl yet, the quetzalcoatlus, named after the Aztec feathered serpent god. With a wingspan of 20 metres, it dwarfed the tiny anurognathus, a pterodactyl the size of a sparrow. In 2004, Chinese researchers discovered the world's first fossilised embryonic pterosaur, dating to 121 million years ago. It was found inside fragments of eggshell, its leathery wing membranes and skin imprints "exquisitely preserved". Researchers said it was probably a few days away from hatching when it was fossilised.
Whatever killed the dinosaurs also wiped out the pterosaurs; they too are believed to have died out around 65 million years ago.

Pterodactyls were the first flying vertebrates; other "reptiles" that had taken to the air were strictly gliding forms. Pterodactyls preceded birds by 75 million years, and bats by 150 million years.
Pterosaurs had no feathers, but at least part of their bodies was covered in hair. This makes them unique among reptiles, though not unlike bats. Some believe this is an indication that they were warm-blooded. Also up for debate is how pterosaurs moved on land - did they walk on their hind legs, like birds, or did they use all fours, bringing into play their three-toes front feet as well as their four- toed rear feet.

Pterosaur fossils display no clues that they adapted to flight after living first in trees, as birds did. It is thought instead that they took off from the ground, launching themselves off cliffs or hills.
Competition from early birds is thought to have been a key factor in their extinction.

Kate Thomas is a foreign news reporter for the Independent, paying special attention to humanitarian and development stories. She has reported from West Africa, Europe and Southeast Asia. Kate has previously worked in the NGO sector in Thailand, Cambodia and the UK, and regularly contributes to travel supplements and guidebooks on developing countries.

What are the steps to solve IELTS Reading True/False/Not given questions?

What does it mean? True/False/Not given type of questions are related to the

1. MAKE SURE YOU SPELL YOUR ANSWER CORRECTLY Your answer will be marked as

How to Do True False Not Given Type of Questions in IELTS Reading?

&nbsp; True False Not Given questions are considered to be the trickiest