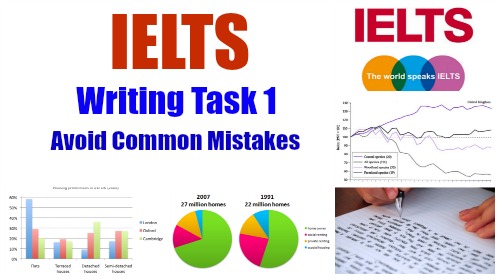 The Writing Task 1 of the IELTS Academic test requires you to write a summary of at least 150 words in response to a particular graph (bar, line or pie graph), table, chart, or process (how something works, how something is done).

In IELTS writing module, the most complicated part is writing the introduction. If you have a good technique for this, then the rest of the task is easy.
• The first thing to note is that writing about Tables, Graphs and Diagrams is not the same as writing an essay in IELTS writing task 2.
• We are NOT asked to give our opinion on the information, but generally to write a report describing the information factually.
• It is NOT necessary to write an introduction like in an essay for this writing task. We are writing a report, which means that we do NOT begin with a broad general statement about the topic.
• We do NOT need to write a conclusion which gives any kind of opinion about the significance of the information.

Three steps to keep in mind

1. Identify the main idea behind the graph or table. This will be the focus of your first sentence.

2. Consider the details of what is being shown – the units of measurement and the time frame – and decide how much you need to include.

3. Consider the language to use – the introductory expressions, the tenses of the verbs, the correct expressions of time or measurement

1. Refer to the visual directly (e.g. This graph shows the population of Canada in from 1867 up to 2007.) However, this method is not advisable, since the instructions in the IELTS test will normally give you just this information. If you copy directly from the paper you are wasting time, since the examiner cannot assess your English from a copied sentence.

2. Refer directly to the main message conveyed by the visual (e.g. There was a sharp increase in the population of Canada from 1867 up to 2007.) This way is perfectly acceptable, and shows that you are able to recognise the main concept or message that the graph or table shows.

3. Combine the two (e.g. The graph shows that there was a sharp increase in the population of Canada from 1867 up to 2007.) This is also acceptable, and is often used as a convenient way to start. In order to use this method, it is necessary to use a few fixed expressions, which refer to the text itself, like those below.

• There was a substantial increase in the value of stocks on March 15th.
• House prices rose dramatically in July.
• The number of tourists visiting New York fell sharply in October.
• The percentage of students walking to school continued to rise gradually over the ten year period from 2000-2010.
• There was a sharp increase in employee turnover after the strike.
• Interest in environmental issues has risen steadily over the last 10 years.

1. Percent – the word percent comes after a number

In many of the IELTS writing task 1 questions, we will have to deal with percentages. This is a good opportunity to express these percentages in a different way and boost our score. A way of varying this language is to express them as fractions or proportions.
Remember that we should vary our language as much as possible in order to score high in the ‘lexical resource’ part of the test.
It is also fine to use approximations, for example, ‘49%’ can be expressed as ‘nearly a half’.

Using appropriate tenses in IELTS writing task 1 is essential for a high band score.
The key is to look at the title of the chart and the information contained on both axes to establish what time frame is used. This will help us establish what tense we should use.
Example:
• If the time is one point in the past, for example January 1990, then we should use the past tense.
• If it has projections for the future, for example 2045, we use future tenses.
• It there is no time, we use present simple.

IELTS writing task 1 is essentially a summarising task. The overview paragraph should contain two or three sentences summarising the main features of the graph. Here are some short phrases that can be used.
• To summarise, the most marked change is….
• Overall it is clear….
• Overall the majority/minority….
• In sum, the most noticeable trend is….
Don’t use ‘to conclude’. This is only for discursive essays.

The continued rise in the world’s population (Corrected Essay)

This is a two-part question essay. The first one is asking for the cause

Do long essays really get you a better band score?

Let’s get straight to the point: while it’s true that there is no official IELTS

A Guide to Concise Writing

Last month, when being asked to rephrase a topic sentence, a member in Let

Describing Maps: Changes in the Future

In this week's webinar, IELTS expert Stephen will guide us through describing a