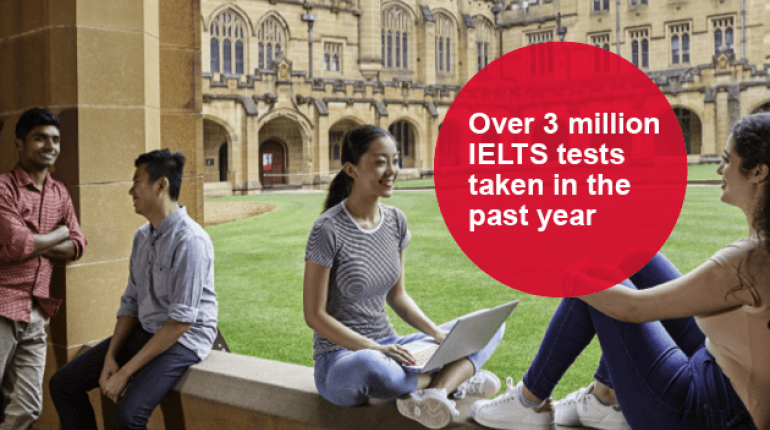 More than three million International English Language Testing System (IELTS) tests were taken in the past year, reflecting the growing importance of the world’s leading test of English for international higher education and migration.

IELTS is the most widely used test of English for migration to Australia, Canada, New Zealand and the UK. It is recognised by more than 10,000 universities, schools, employers and immigration bodies, including all universities in Australia and the UK and many of the leading institutions in the USA.

Established in 1989, and jointly owned by the British Council, IDP: IELTS Australia and Cambridge Assessment English, IELTS is now a household name in many countries around the world.

Warwick Freeland, Managing Director at IDP IELTS Australia said: “IELTS opens doors for millions of people every year, helping them to study abroad, migrate to English-speaking countries or take advantage of the growing need for English in professional life.”

The success of IELTS rests on the high quality of the test, which measures the four key languages skills – listening, speaking, reading and writing. It is backed by dedicated research teams in the UK and Australia, and administered by centres in more than 140 countries around the world.

James Shipton, Head IELTS at the British Council, said: “The continued growth of IELTS that we’ve seen around the world is testament to the popularity of the test with test takers, and to the trust that organisations place in IELTS to provide scores that are a reliable indicator of a person’s ability to communicate in English.”

Planning to study in the UK for a Bachelor or Master degree? Check below

Each test result will be available forviewing online for 28 days, after which

You can practice reading and listening for FREE at https://ieltsonlinetests.com