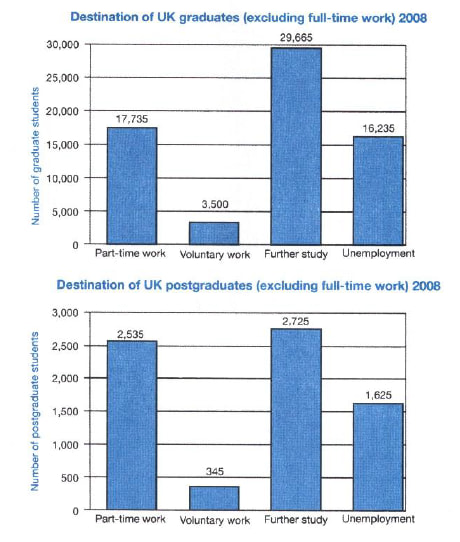 Let us try to do thorough analysis of IELTS writing task 1 of a candidate.

To begin with, maximum graduates (29,665) who did not go into full-time work opted for further studies. while, some of them (16, 235) were unemployed. A slightly higher than unemployed (17,735) choose to go for part-time work whereas, a small proportion showed interest in voluntary work.

On the other hand, almost same scenario was with postgraduates and majority of them (2725) opted for further study. 2535 number of postgraduates took part-time work whereas 1625 postgraduates were unemployed. A small ratio (345) also showed interest in voluntary work.

To sum up, the maximum students who did not made their career in job went for higher studies. whereas, some choose to go for part time job and a few of them took voluntary work.

Let us try to analyse the above IELTS writing task 1 response as follows:

The introductory outline of the question is written well with no error.

Main key features of the question are highlighted well along with figures.

Sentence connector (on the other hand) is used and the key features are again explained well.

Sentence connectors (to sum up, whereas) are used and conclusive feature is written.

The candidate writes free from errors of grammar, tense and others. However, there are some mistakes in complex structure and other part of grammar.

Writing Task 2 (an essay) Some international companies are very powerful

How Many Types of Essays are there in IELTS Writing Task 2?

In the IELTS writing task 2, you are given an essay question which must be

Make and verbs that mean make

I would like to do/give some suggestions (WRONG) --&gt; MAKE some

How to improve Coherence and Cohesion in IELTS Task 2?