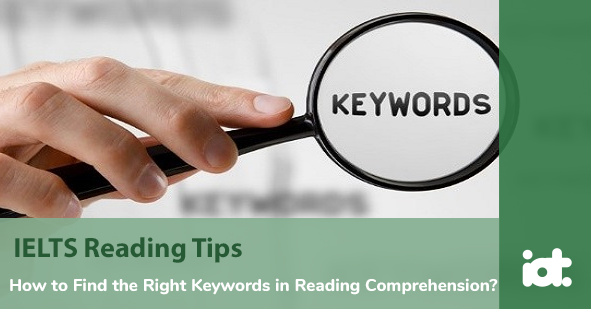 How to Find the Right Keywords in Reading Comprehension?

The reason behind highlighting these keywords is finding easy reference from the passage. If you have a question referring to the year 1978, it would be easy for you to locate it in the passage if you had already underlined it while reading the passage. Otherwise, you would need to read the whole passage to find where 1978 is mentioned and hence, it would consume your time.

In the process of scanning i.e. locating answer of the question, you will first need to read the question carefully to find important keywords you can mark and at the same time, to understand meaning of the question.

Sometimes, your keywords are synonyms or similar words, not the exact keyword as given in the passage and hence, you can try to understand its meaning to relate it well with the right paragraph. However, the nearby words and paraphrasing skill will help you understand the meaning of the question.
Let’s take an example on how to find keywords in question and similar keywords in passage.

Her guests often tease the bride about her husband and give her advice about married life.

Explanation is as follows:
If you read the question, you can identify keywords as “wife-to-be”, “recommendations” and the word nearby the blank, “about”.

Thus, it may so happen that keywords of question do not match with that in the passage. In this case, you may need to paraphrase them or find out their meanings. Here, in the passage statement, “bride” is the word used in place of “wife-to-be” and “advice” in place of “recommendations”.

Also, it is to be noted that “is given” in question is paraphrased grammatically for “give” in the passage statement.

Another important thing to be noticed is that “about” is exactly the same word nearby the blank in the question as you can find in the passage statement.

Thus, you can find the answer as “married life”.

*Note: Always remember that matching keywords would help you to locate the paragraph and its statements for reference but at the end, it’s all about understanding of the question without which answers go wrong. Hence, you should instead try matching the information or the meaning.

Read the following short passages and questions to find out keywords. Fill the keywords in the table given below:

A super-hard metal has been made in the laboratory by melting together titanium and gold. The alloy is the hardest known metallic substance compatible with living tissues, say US physicists. The material is four times harder than pure titanium and has applications in making longer-lasting medical implants, they say.

Quakes are the ever present danger for those who live along the Apennine mountain range in Italy. Through the centuries thousands have died as a result of tremors equal to, or not much bigger than, the event that struck in the early hours of Wednesday.

http://www.bbc.com/news/science-environment-37176502
Which part of Italy is always under the threat of being affected by quakes?

But look closer at the specifics of any quake and the details are much more complicated. The Tyrrhenian Basin, or Sea, which lies to the west of Italy, between the mainland and Sardinia/Corsica, is slowly opening up. Scientists say this is contributing to extension, or “pull-apart”, along the Apennines which works at a rate of 3mm per year. Add in movement in the Adriatic where the crust is rotating in an anti-clockwise direction, and you have a fiendishly complex picture. Italy is literally being pushed and pulled every which way.

When the particulars of an earthquake are studied deeply, it is found that it is very _________

We all recall the L’Aquila (Magnitude 6.3) event of 2009 in which 295 died. But go much further back to Avezzano (Magnitude 6.9-7.0) in 1915, which claimed 30,000 lives; and to 1703 when a trio of Magnitude 6 quakes killed at least 10,000 people.Thankfully, we tend not to see deaths on those scales anymore, and that is because of more robust building, better preparation and more co-ordinated emergency responses after the fact.

Which one of the following is NOT the reason why deaths are rare with quakes of magnitude between 6 and 7?

But look closer at the specifics of any quake and the details are much more complicated. The Tyrrhenian Basin, or Sea, which lies to the west of Italy, between the mainland and Sardinia/Corsica, is slowly opening up. Scientists say this is contributing to extension, or “pull-apart”, along the Apennines which works at a rate of 3mm per year. Add in movement in the Adriatic where the crust is rotating in an anti-clockwise direction, and you have a fiendishly complex picture. Italy is literally being pushed and pulled every which way.

How to Do Summary Completion Type of Questions in IELTS Reading?

There are two types of questions of summary completion type; one with the

- In Academic Reading, begin by going quickly through each passage to identify

1. MAKE SURE YOU SPELL YOUR ANSWER CORRECTLY Your answer will be marked as

&nbsp; The famous British journalist&nbsp;Harold Evans has written down a

Read a lot of Academic texts Develop a habit of reading in your free time! The