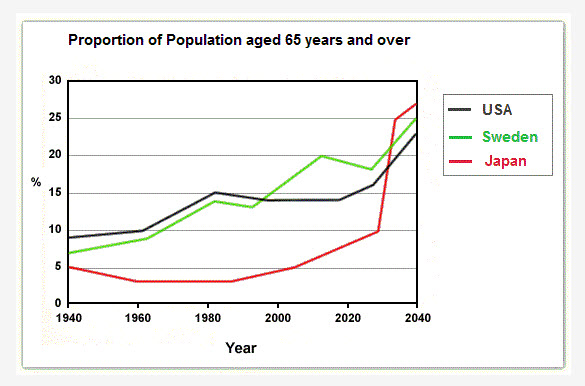 The line graph represents the proportion of population for the age 65 and above, between the years 1940 to 2040 in three different countries.

Overall the age range of 65 and above of Japanese in 1940 is less compared to Americans, and in 2040 it is the vice cersa.

Differentiating Japan and Sweden. The Japanese and Swedish population have approximately 5% and 7% in 1940 where the population in the age range gradually decreased between the year 1980 to 2000 but there is sudden raise between 2020 to 2040 but on the other hand Sweden population is slightly above Japan in the beginning but even though there were up's and down's they are less than Japan in 2040.

Now comparing percentage of Sweden and USA, at the beginning USA has percentage nearly 9%, and they are slighly above Sweden between 1980 to 2000, but approximately after 2000 USA gradually maintained and sudden surge after 2020.

Being rich doesn't mean not only by money but also by heart. And I completely agree, the most important thing about being rich is that, it gives a person the opportunity to help other people.

For past two years, starting from 2019 until now several people has suffered from Covid 19 where the people were requested to get admit in hospital even though they had small symptoms like cold or cough and where asked to pay a sum of amount initially where they were not able to. But at that period many good hearted rich people volunteered themselves to help the people in needy. For example, my classmate whose father is an industrialist who had the opportunity to help the people in need by providing 50% of the hospital charges initially for about 10 to 20 members who were admitted in the government hospital.

And in the current era there are young generation who are not able to afford education, due to that they are being forced to work by their parents for daily income which scatters their dream. In this case, there are some high society persons who helps the young generation by providing free education through trust concept. For example, my neighbor who is a rich business man gives around 25% of his turn over to a trust where there are around 150 students who benefits from this.

Recapitulating, money can always be earned at any time but not blessings. It is really good for each and every person in a higher society to help the people in needy when they receive an opportunity.