The bar chart below gives information about vehicle ownership in China.

Write a report for a university lecturer describing the information. 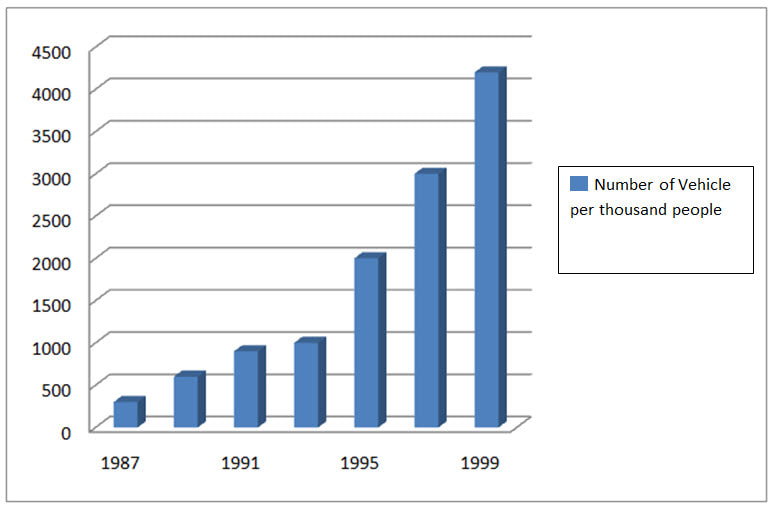 The bar chart below illustrates the figures of vehicle ownship per thousand people in China from 1987 to 1999.

Overall, the vehicle ownership is keeping raising up during the period of 12 years, especially in the last 4 years covered in this chart.

In the year 1987, the number of vehicle ownership per thousand people in China is not high, it is only 200. And the number experiences a gradual increase in the next 6 years, it arrives at appromixately 900 in 1993, the figures were almost 4 times of that of 1987.

Rich countries should allow jobs for skilled and knowledgeable employees who are from poor countries. Do you agree or disagree?

With the globalization of the whole world, the immigration of working force is becoming more and more popular nowadays. Skilled and knowledgeable employees who normally obtain certain professional qualifications, usually prefer to moving to developed countries. A majority of these people are from countries which are not so affluent. From my point of view, this kind of population movement tend to be more regular in the near future and it should be run smoothly regardless of the wealth difference between the two places.

On the one hand, the movement of these advanced human resources is beneficial to the destination countries. The shortage of local skilled and knowledgeable employees will be remitted by bring along people of same types of work from overseas. It is much efficient in terms of cultivating the employees.

On the other hand, allowing the immigration of skilled and knowledgeable employees from poor countries may sometimes rescue their career lives. Due to the inefficiency of employment of their own countries, these skilled people probably won't be able to catch an ideal job matching the pay and personal developing expectation. The attractive economy conditions from the destination countries is the main factor of their immigration.