The two bar charts depicts the quantity of male and female people in percentages, who belonged to determined ranges of age in France and India in 1984.

Overall, France population were evenly distributed over the first half of the average lifespan. Converseley, Indian had a more young population. In both countries, and through all the age ranges, man and women had relatively the same figures.

As for France, it had the same numbers of female and male people in each range until the 40 years old, starting from the very first one (0-5 years old) at around 3% of the total inhabitants, from this range onwards, the figures has gradually decreased. Consequently, the final range, which is over 85 years old, only accounts for 0.5% in males and almost 2% for females.

In the case of India, it revealed a different structure, because its population is mostly young, that babies represent the greatest proportion at 7%, for both male and female, almost two-fold than france people in this range of ages. Nevertheless, this figures have sharply decreased as the ranges of ages increases, without loosing the simetric distribution of men and women. 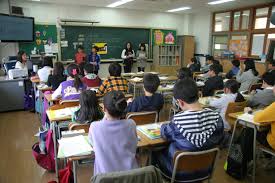 Nowadays parents tend to enroll their children to a wide variety of extra classes, so that all their leisure time throughout all the seven days of the week is full. In my opinion, that might be affecting children's mindset since many of the activities are already covered at their schools.

School have enhanced their syllabus over the last decades.Not only have they included state-of-the-art courses but also have improved the traditional ones with new methodologies. For instance, several subjects such as history, geography and maths are taught in a foreign language; by doing so, they are making the most of the class for the students. Furthermore, schools' investment in new facilities for providing specialized courses such as swimming, art and music is growing; according to some statistics this have been motivated by the expectation of the return of the little ones to presential classes after the pandemic, which in terms of education means a brand new catalogue of activities for them.

On the other hand, children might get quickly stressed when they are obliged to assist to courses in their free time; even worse, when they admittedly dislike it. Several psychologists suggest giving time to children to rest, and allow them to freely choose activities that they find interesting; the more they entertain doing that, the more their relieve their anxiety, which often improve their concentration when dealing with the real courses at school and also, they might improve his grades by following this.

In conclusion, children are already spoiled for choice at their respective schools that extra classes are really irrelevant to be considerd. Furthermore, overloading them with classes would pose a serious thread to their psychology and might worsen their performance at school.