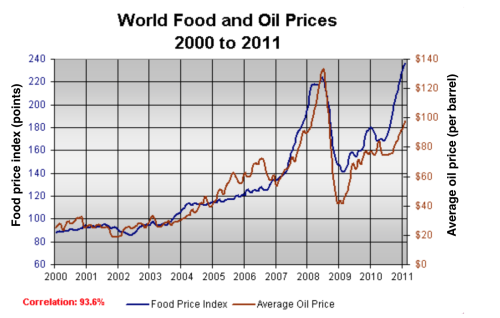 The line graph illustrates fluctuations in international food and oil prices during the years 2000 to 2011.Unit for oil price is indicated as per barrel and food price as points.All the prices mentioned below are approximate.

Both the food and oil prices remained almost similar with slight fluctuations from 2000 to 2004,with food prices starting from approximately 89 points to almost 102 points while oil prices ranged from $92 to $100.

In the duration from 2004 to 2007,prices for both inclined gradually.For food,ranging from 110 points to 138 points approximately whereas for oil,it accounted from $100 to $140.

To sum up, we can say that overall prices increased with the passage of time for both the items with a correlation of 93.6%. 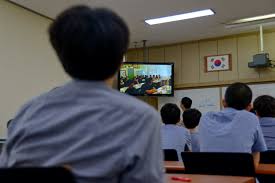 With the advancement of age,World is being transformed into a global village,increasing the ways of intercommunication.One of its chains include the INTERNATIONAL STUDENT EXCHANGE PROGRAM.Majority of the tutors are of the view that this exchange is quite favorable for teenage students.I agree with them but it has some drawbacks too.The essay would describe both the ends of talk to analyze properly.

It is now becoming increasingly famous in majority of schools to exchange their Students for academic purposes across the World.The topmost students of different grades are provided with the opportunity to travel abroad for studies.This phenomenon benefits the teenage pupils in multiple ways.They get to know about different cultures,customs and traditions across the world.They also forge new friendships and relations.It instills them with a sense of responsibility,confidence and what is right and wrong.It also accredits them with the opportunity to further apply for scholarships in different universities on returning for higher education.

However,this exchange program can have some adverse aspects too.As teenage is a quite delicate and adventurous period of life where a child could be moulded into any shape,it can derail a pupil upon getting a sense of freedom.They could indulge in any negative activities proving detrimental for themselves.

To sum up, we can say that these kind of initiatives must be appreciated as it adds upto experience and confidence of students and instills them with a sense of responsibility.Also it is beneficial for the institution as well as the state.Although it has got some negative aspects too but the positive aspects outreach negative ones proving it to be a triumph for everyone.