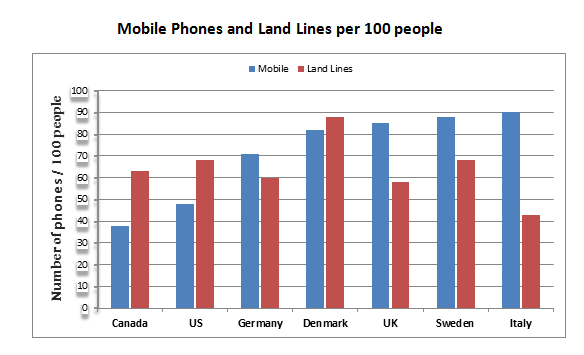 The bar chart displays information regarding the usage of mobile phones and landlines per 100 people in 7 different countries (Canada,US, Germany, Denmark, UK, Sweden and Italy). Overall, Italy has the highest usage of mobiles compared to Canada, which has the least number of mobile phone users. In contrast, Denmark has the most use of landlines compared to Italy which has the least. In general an upward trend is visible in the usage of of mobiles amongst the 7 countries, however the same cannot be said for the use of landlines.

The highest number of users for mobiles was found in italy with 80 people using this device. The opposite can be seen in Canada who have approximately half of the users for a mobile phone compared to Italy.

On the other hand, it is observed that Denmark has the highest number of people with landlines at an estimate of 88 users. This is in contrast to Italy who have approximately half the number of people compared to Denmark with just over 40 users.

In general, Canada, US and Denmark have a higher use for landlines with approximately 60, 68 and 88 users respectively. Whereas, Germany, UK, Sweden and Italy all have higher users of mobiles all with 70 users and above.

A mixture of nationalities has become increasingly common around the world as individuals migrate to other countries for a better life or for employment purposes. With different nationalities, there is a different culture and lifestyle which can be extremely fascinating for those who have not seen or experienced such diversity. This can help a country evolve faster as they will get to witness a different lifestyle to their own. Therefore, I strongly agree with this point of view as i believe that a mixture of nationalities can only be beneficial for a country's enhancement.

First of all, introduction of different nationalities brings cultural and ethnic diversity. This is because different countries around the world have a rich history and centuries old traditions that have been carried forward from generation to generation. For example, India is known to be a country rich with culture and festivity. Indian's have many different traditions that are not known in other parts of the world such as Holi the festival of colours. Now, with the migration of Indian nationals to countries like the UK many people in the western world are aware of the festival of colours and actively partake in the occasion every year. This amalgamation not only allows an understanding of different nationalities but also enables individuals to respect other cultures.

In conclusion, I believe that the amalgamation of nationalities is the best way to introduce diversity in culture and food, and that this is the main way to be able to learn about and respect other peoples traditions and heritage.