The diagram below shows some design principles for an energy-efficient house and how they work in different climates. 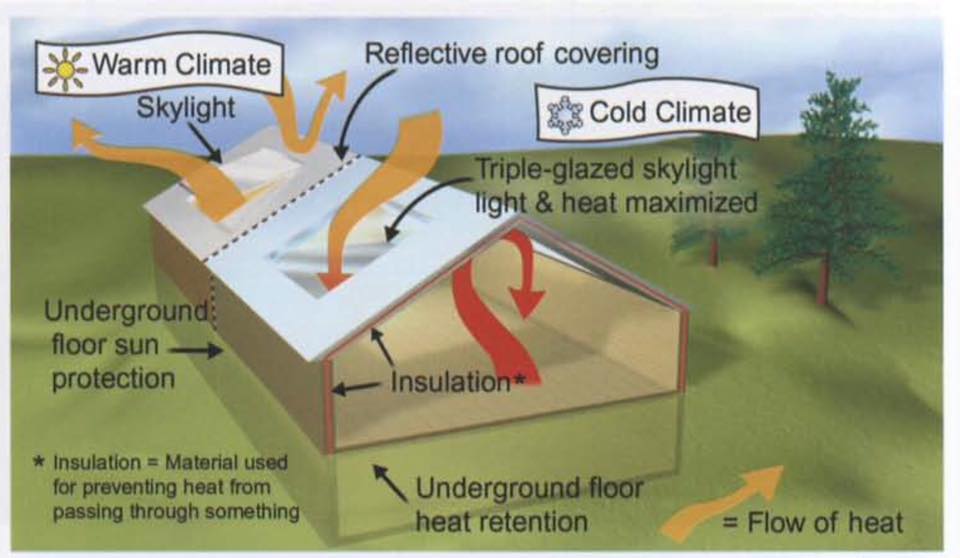 The diagram illustrates how an energy-efficient house is constructed with the design in purpose to work in both warm and cold climate. Overall, it is built with material so that it blocks skylight during summer and keeps the optimal temperature in the inside during winter.

Seeing from the top, the house is covered by a reflective roof. It stops the sunlight to pass to inside of the house and hence the indoor temperature would not be too high. In addition, there is an insulating material used in the middle layer of the roof to assist the heat stopping objective. On the other hand, a triple-glazed skylight material is designed at the centre of the roof. It is utilized to maximize the light and heat transmission in cold weather.

Also, the house is built with underground floor design. The main function of this is for protection from sunshine and retention of heat.

Once children enter school, teachers have more influence on their intellectual and social developments than parents.

To what extent do you agree or disagree with this statement?

Give reasons for your answer and include any relevant examples from your own knowledge and experience.

Some people said that children would rather look up to their teachers than parents, both on intellectual and social development, once they started schooling. Although teachers do share the duty of teaching, the situation depends whether parents would lose their position of influence to their children.

As boys and girls spend one third of the day with their teachers, most people would agree that teachers have a significant role on their cognitive and behavioral learning. Kobe Bryant, one of the greatest basketball player in the world ever, once complaint to the media that his daughter took more on her coach's side than his when they were arguing on basketball knowledge. Also, schooling is designed for teaching knowledge which is new to children. When a boy is taught on new things, he can easily get amazed by what his teacher knows and what he is capable of doing. This increases the chance that kids would take their teachers as idols.

However, there is something that should be taught or affected by parents when children grows up. For example, in Chinese eating etiquette, it is more appropriate and polite to let the older and senior people to take the food before younger and junior ones when the food is first served on the table. As parents always get chances to have meals with their children while teachers do not, this humbleness attitude can only be learnt through observing what parents show them. Secondly, since parents have become more educated than the past, they can somehow be the role model of their sons and daughters when they have good social status. Furthermore, people depend their learning more on the intranet and less at the school than before, which would be resulted in teachers having less influence on the children.

To summarize, parents still stand their important role to the development of children, although teachers can have a significant effect on kids' learning when they start schooling.