Read the text below and answer Questions 1-14. 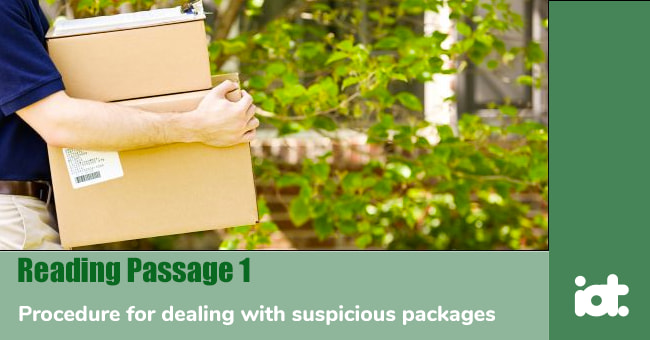 PROCEDURE FOR DEALING WITH A SUSPICIOUS PACKAGE

Read the text below and answer Questions 10-14.

Read the text below and answer Questions 15-28.

Read the text below and answer Questions 22-28.

Read the text below and answer Questions 29-40.

Treatments for the common cold

Colds, we all get them. Adults typically have two to four colds a year and children about double that.

Throughout the ages, many treatments have been tried for the common cold. These include bizarre cures, such as wearing wet socks, putting brown paper and vinegar on your chest and soaking your feet in hot water, which today of course seem stupid. Nevertheless, even modern treatments for colds are not particularly effective. Generally, they only reduce the symptoms: blocked or runny nose, sneezing, sore throat, coughing rather than treating the viral infection itself.

One area of treatment and prevention for colds is diet. It is particularly important to eat healthily to reinforce your body's capacity to deal with viral infections: a low-fat, high-fibre diet, which includes plenty of fresh fruit and vegetables. It's also recommended to drink plenty of fluids to replace those lost due to sweating and a runny nose.

It is commonly believed that supplementing your diet with vitamins C and D is also a good idea. However, the evidence suggests that the benefits of these are modest. Taking vitamin C has been shown to help people under great physical strain, such as marathon runners, from falling ill, but for the rest of us it only reduces your risk by 3%. This means that if you get three colds a year, vitamin C supplements will only enable you to avoid one cold in 10 years.

More effective are zinc supplements. Taking zinc syrup, tablets or lozenges within a day of the symptoms starting will speed up recovery and lessen the severity of symptoms, by a day or so. Clinical trials show that children taking regular zinc supplements will suffer roughly 1 to 1.5 fewer colds a year on average - compared to the six to eight that is normal for school children. However, long-term use of zinc can be problematic as it could cause side effects such as vomiting and diarrhoea. The consumption of alcohol is sometimes said to make you more vulnerable to colds. However, recent studies suggest that regular but moderate drinkers are in fact less likely to catch a cold. This is particularly the case if you drink wine.

Many people take medication when they have a cold. Over-the-counter pills typically combine painkillers and decongestants. Painkillers, such as ibuprofen, paracetamol and aspirin, can help reduce fever as well as pain. Decongestants, such as pseudoephedrine, can be taken by mouth or as a spray in your nose and are designed to reduce nasal congestion. However, the benefits of these medicines are often modest and vary between people, and with the particular types of infection. Nevertheless, these over-the-counter cold medicines are probably the most widely used type of medication.

One word of warning about medication - do not even think of taking antibiotics. There is, quite simply, no reason why antibiotics should help, since they target bacteria whereas it is viruses that cause colds.

Another oft-used treatment are herbal remedies, such as Echinacea and garlic tablets, but these do not have any effect. The only herbal remedy to show any beneficial results in tests is honey. These indicate that a spoonful, taken straight before bed, can soothe a cough and has a better success rate than other sugary drinks and cough syrups. However, further studies are required.

Other remedies that seem to have some impact include steam inhalation, which involves putting a towel over your head and sitting with your head over a bowl of hot water. You simply close your eyes and breathe deeply. Gargling with salt water sometimes reduces a sore throat and nasal congestion and menthol sweets can also help relieve a sore throat.

One thing that people tend to forget about is the psychological support you receive from the people around you. With a high level of support, people tend to get over their illness more quickly. For example, studies show that patients who report feeling greater empathy from their doctor recover faster, both in terms of their symptoms disappearing and in measures of their immune activity.

Finally, though, it is worth pointing out that perhaps the most effective treatment for a cold is taking measures to avoid getting one in the first place. And much of this is commonsensical: wash your hands regularly and properly, particularly after touching your nose or mouth and before handling food; clean surfaces regularly to keep them free of germs; use your own cup, plates and cutlery and use disposable paper towels to dry your hands and face rather than shared cloth towels. Other measures, like opening the window on a crowded bus, may also be effective, but are not to everyone's taste.

PROCEDURE FOR DEALING WITH A SUSPICIOUS PACKAGE

If you believe the item is a bomb, call Security and Mail Room and 1

If the suspicious mail or package has not been opened, you should put it in a plastic bag and 2

Whether the package has been opened or not, you should stay in your office or immediate 3

You should advise Security of the 5 of the incident.

It is important to keep your hands away from your 6  contamination.

If any 9 from the item, place an object over it without disturbing it (such as a waste bin).

10     If you do the course, you will gain knowledge critical to success in today’s business world.

11     In today’s business world, large businesses often find themselves increasingly in a position where they have to take a stand on serious ecological issues.

13     The course is entirely theoretical and does not offer work experience.

14     There are special scholarships for university graduates.

The text has seven paragraphs, A-G.

Which paragraph contains the following information?

15     locations where training is available

21     examples of fields of business dealt with

Match each description with the correct term, A-G.

Write the appropriate letter, A-G, next to questions 22-28.

22 The closure of the department meant that over 100 people lost their jobs because they were no longer needed.

23 An employee is using a company vehicle for unauthorised personal use.

24 An employee is fired for misusing the Internet at work.

26 The resignation of an employee as a result of the employer allowing colleagues to subject them to harassment, bullying, victimisation, humiliation or discrimination.

27 An employee is dismissed because of trade union membership

28 An employee is dismissed without being given proper notice

Ancient treatments for the common cold mentioned in the text include

Unless you take vitamin C, you are

Effective cold treatments and remedies include

Increased levels of immune activity have been associated with