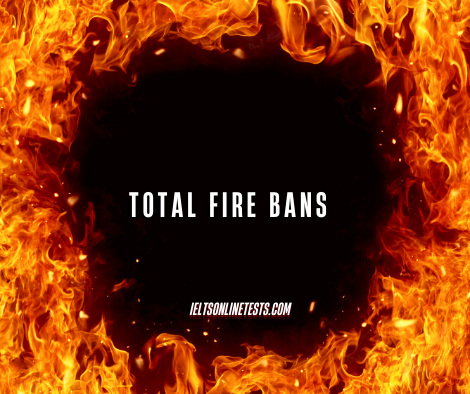 Read the notice on total fire bans, and answer questions 1-4.

Read the information sheet 'The facts about plastic', and answer questions 11-14. 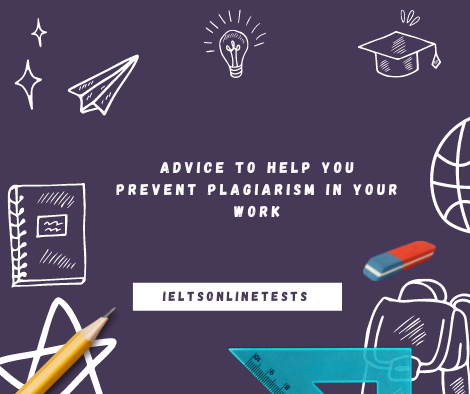 ADVICE TO HELP YOU PREVENT PLAGIARISM IN YOUR WORK

Read the text below and answer questions 15-21.

Read the text below and answer questions 22-27.

Have you ever noticed that when you walk into a shop, you tend to look over or veer to the right? Consumer psychologists say this is a classic biological trait, linked to most people's preference for using their right hand. While it's something we tend to do in shops as well as places such as museums and art galleries, supermarkets really capitalise on this. It's to the right where you'll see temporary displays of products designed to grab your attention and entice you to make a snap purchase. This can be anything from fresh flowers and chocolates to umbrellas if it's been raining.

Consumer psychologist and Senior Lecturer at Deakin University Dr Paul Harrison says the location of a store's entry point has a significant effect on how people shop, and even how much they spend. 'Right-hand side entries favour anti-clockwise movement through the shop, while left-hand side entries favour clockwise patterns. Research in the US has shown that shoppers who travel in an anti-clockwise direction will spend, on average, two dollars more per trip than clockwise shoppers.'

Contrary to popular belief, once we're in the store most of us don't weave up and down the aisles in an orderly way. Research conducted on shopper movement patterns in-store · suggests people travel to some aisles only, and rarely in a systematic up-and-down pattern. Even longer, planned shopping trips follow this pattern.

The most common path to travel in-store is around the outside perimeter, dipping in and out of the aisles as needed. As a result, the ends of each aisle are the most profitable part of the store. Product manufacturers pay big dollars to place their products there to grab shoppers' attention, and it's usually familiar brands that provide the greatest profit margin.

Many supermarkets micro-manage the various fresh food sections of the shop. Instead of approaching the shop as a single entity, they separate areas into particular zones and have developed different marketing plans for each of these areas. These anchor departments usually include fresh fruit and vegetables, meat, dairy, and the bakery-and all are designed to give shoppers a sense of individual difference. Research indicates consumers will spend more time in the supermarket because of these different zones.

Ever walked into a big supermarket just to buy some bread and milk and found yourself leaving with a basket of additional items? A classic retailing trick is to locate the milk and bread at the very back of the store ( often at either end) to encourage short-term shoppers to walk right through the shop and be tempted by the other, more expensive products along the way.

According to Harrison, no matter what we might like to think, it's human nature to be attracted to a bargain. 'Although we think we know we're being manipulated, we tend to fall for it anyway.' Even the word 'special' plays on our subconscious. 'Just the word sets off a psychological process in your mind where if something is labelled "special" we think it must be good. It also feeds into a theory known as the scarcity effect. This is where we think that if it's on special, then it must only be available at this shop or for a short time, and we afford it more value than the products around it.'

Soups and dressings often involve long buy times because of the sometimes-confusing variety of options on offer. As a result, long buy-time products are placed where shoppers will not feel hurried, crowded or that they're getting in the way of other customers while they work out what they're going to buy. These product areas will often be clearly marked out in a separate area.

Shop alone. People who shop as a couple tend to put more in their trolley, as each person will have their own ideas about what's important and should be purchased.

Avoid big supermarkets. Don't shop at a big supermarket if you just want to drop in and pick up a few things-you're much better off in a small store. It takes more effort to get in and out of a big supermarket, and as a result you may feel the need to stock up once you're in there.

Eat before you shop. Don't shop when you're hungry-it's a sure-fire way to end up with a trolley full of unnecessary purchases.

In boxes 1-4 on your answer sheet, write:

1 You can go to prison for a year if you light a fire outside.

3 You can contact your local radio station for more information.

4  You can use your pizza oven if it is under your patio.

Read the information on food poisoning in the table and answer questions 5-10.

Look at the information on food poisoning and match the statements with the appropriate type of poisoning.

7 You can be sick for up to three weeks.

8 You can catch this from some common household pets.

9 Not usually found in animals.

10 You can pick this disease up from the garden and it starts within a few hours.

Choose NO MORE THAN THREE WORDS from the text for your answer.

Just under a quarter of waste plastic comes from 11

Just over two-thirds of recovered PET was made into 12

Plastic bottles are more energy efficient because they are 13

Plastic that is thrown away has been found on 14 where no people Live.

The text has seven sections: A-G. Choose the correct heading for each section from the list of headings below.

Write the correct number i-ix in boxes 15-21 on your answer sheet.

Complete the sentences below. Choose NO MORE THAN THREE WORDS from the text for each answer.

The main focus of the health centre is to ensure simple  22 for patients.

Patients may be able to see some doctors before 23

In an emergency, you should call the 24 telephone number.

If you are over 45 years of age, you should have a heart check-up and a  25 every two years.

Patients must give 26 for their medical history to be disclosed to a third party.

You will need a valid certificate before you undertake a 27

Choose the appropriate letters A-D and write them in boxes 28-33 in your answer sheet.

Why are essential, everyday items generally found at the back of the shop?

Why are there different fresh food sections in a supermarket?

The word 'special' in a supermarket specifically refers to:

What makes us spend a long time in certain sections of a supermarket?

Which of the following will make you spend more?

35 People tend to spend more than they intended in supermarkets.

36 Bread and milk are usually more expensive than other items in the store.

37 You will usually save money by going on one big shopping trip, less frequently.

38 Bread and milk are usually found together.

39  Left-handed people tend to walk over to the left in a shop.

40 Most shoppers can't resist a bargain.