Read the passage below and answer questions 1-15 that follow. 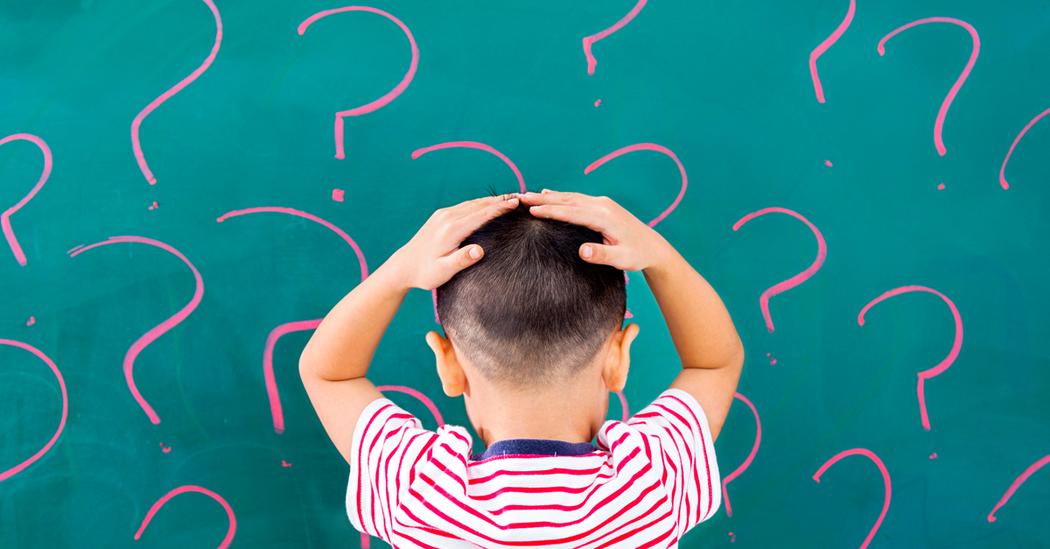 Read the advertisements for musical concerts below and answer the questions that follow.

Read the information below on treatment for snake bite, then answer Questions 11-15.

Snakes are not normally aggressive and tend to bite only when they are threatened or mishandled. Some snakes, e.g. the carpet snake, are not poisonous. Others, e.g. the brown snake, tiger snake and taipan, are very poisonous.

These do not appear immediately, but from about 15 minutes to 2 hours after the casualty is bitten. There are often no visible symptoms or signs. Take seriously any information from a casualty concerning:

Read the passage below and answer questions 16-25 that follow.

Situated about 20km from the city centre, Northside University is not easy to get to by public transport. However, students have several different alternatives for accommodation on or near the University campus.

Firstly, the University has several residential colleges; Burnside College, Boronia College and Helen Turner College. Each of these colleges provides a single fully furnished room with shared bathroom facilities, and meals. Burnside College is the most expensive, with 1996 fees ranging from $154 – $165 per week. However, each student room is equipped with a private telephone and voice-mailing facilities, and within the next few months college students will have access to E-MAIL, On-Line library, INTERNET and AARNET via a network with the University. Boronia College has similar room facilities but does not offer the same computer access. It also offers only 17 meals per week, compared to Burnside’s 21. Fees vary from $147 – $157 per week. Helen Turner College is a college exclusively for women, with similar fees to Boronia College. To attend classes, students have a short walk from the residential Colleges to the main University campus.

Off campus, there are many flats, townhouses and houses for rent in the local area. These can be found by looking in the local newspaper under ACCOMMODATION, or by checking notices pinned up on the boards around the university. There are always students advertising for housemates and you can even add a notice of your own to the board. However, even sharing accommodation with others can be expensive; tenants are usually required to pay a rental bond, rent in advance, and telephone/electricity/gas bills in addition to food bills. Be sure that you know what you will be required to pay before you enter into any written agreement.

Read the passage below and answer questions 26 – 40 that follow. 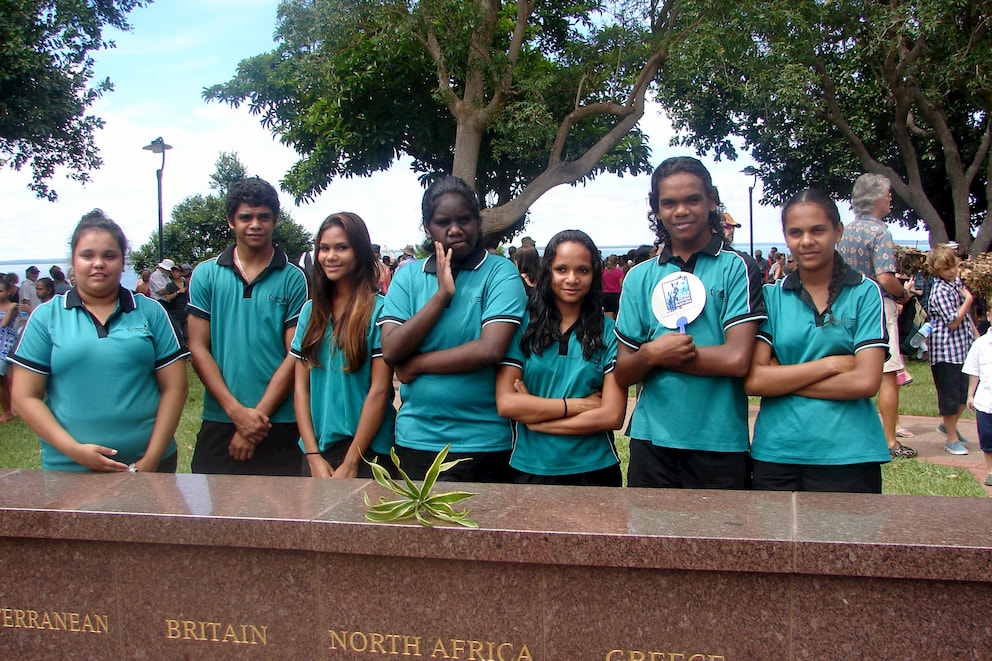 Kormilda College is a unique school situated near Darwin in Australia’s Northern Territory. For 20 years, to 1989, Kormilda College operated as a government-run, live-in school for high school Aboriginal students. In 1989 it was bought from the Government by two Christian church groups and since then it has expanded enormously, to include a day school as well as boarders (residential students) in Years 8-12. Although 320 pupils of the College’s total number are Aboriginal students, drawn mainly from isolated communities across the Northern Territory, Kormilda also has a waiting list of non – Aboriginal students. With a current enrolment of 600, student numbers are expected to grow to 860 by 1999.

Central to the mission of the school is the encouragement of individual excellence, which has resulted in programs designed especially for the student population. Specialist support programs allow’ traditional Aboriginal students, who are often second language users, to understand and succeed in the mainstream curriculum. A Gifted and Talented Program, including a special Aboriginal and Torres Strait Islander Tertiary Aspirations program, has been introduced, as has an Adaptive Education Unit. Moreover, in Years 11 and 12, students may choose to follow the standard Northern Territory Courses, or those of the International Baccalaureate (I.B.).

To provide appropriate pastoral care, as well as a suitable academic structure, three distinct sub-schools have been established.

Students remain in their sub-schools for classes in the main subject areas of English, Maths, Social Education and Science. This arrangement takes into account both diverse levels of literacy and the styles of learning and cultural understandings appropriate to traditional Aboriginal second-language users. In elective subjects chosen by the students – which include Indonesian, Music, Art, Drama, Science for Life, Commerce, Geography, Modem History, Woodwork, Metal Work, Economics and Legal Studies – students mix on the basis of subject interest.

To aid the development of the Aboriginal Education program, a specialist curriculum Support Unit has been set up. One of its functions is to re-package school courses so that they can be taught in ways that suit the students.

The education program offered to Aboriginal students uses an approach which begins with the students’ own experiences and gradually builds bi-cultural understanding. In one course, “Introducing Western European Culture Through Traditional Story-Telling”, students are helped to build a common base for approaching the English literature curriculum. Drawing on the oral culture of traditional Aboriginal communities, they are introduced to traditional stories of other cultures, both oral and written. In a foundational Year 10 course, “Theory of Learning”, concepts from Aboriginal culture are placed side by side with European concepts so that students can use their own knowledge base to help bridge the cultural divide.

Another project of the Support Unit has been the publication of several books, the most popular, Korniihla Capers. The idea for Kormilda Capers came about when it became obvious that there was a lack of engaging material for the school’s teenage readers. One of the stories in the book, “The Bulman Mob hits the Big Smoke”, recounts the adventures of Kormilda pupils on their first visit to Sydney, Canberra and the snow country. Focussing on experiences which have directly affected the lives of students at the College, and on ideas and issues which are of immediate interest to Aboriginal students, Kormilda Capers has earned enthusiastic support within and outside the school.

On the following page is a Contents page from a magazine.

Answer questions 1-3 by writing the appropriate page number (numbers) where the information appears in the magazine, in boxes 1-3 on pour answer sheet.

What page would you turn to for advice about money?

On what TWO pages can you read about art?

On what page is the new sports stadium discussed?

Answer Question 4 by writing NO MORE THAN THREE WORDS in box 4 on your answer sheet.

How often does this magazine appear?

Read the advertisements for musical events on the previous page.

Answer the questions below by writing the appropriate letter or letters A-E in boxes 5-10 on your answer sheet.

Your answer may require more than one letter.

Example          At which concert will a television character appear?

5 At which concert will young performers play?

6 Which concert will be held outdoors?

7 Which concerts will happen more than once in Sunday?

8 Which concert will feature only one performer?

9 Which concert is NOT being held at night?

10 At which concert can the audience choose what will be performed?

The passage “First Aid for Snake Bites” explains what to do in the event of a snake bite.

Read the additional instructions below and choose the section A-D to which each instruction belongs. Write the appropriate letter in boxes 11-15 on pour answer sheet.

11 help the casualty to sit or lie down

12 wear stout shoes, walk-socks and jeans (or similar clothing) in areas where snakes could be present

13 pain or tightness in the chest or abdomen

14 do not try to catch the snake

15 swelling of the bitten area

Choose the appropriate letter A-C and write it in boxes 16-19 on your answer sheet.

University townhouses are available for

Accommodation in the area surrounding the university is

Complete the following sentences with information from the passage.

A student living in a 3-bedroom University townhouse would pay 20 per week for a room; in comparison, the cheapest accommodation available at Burnside College is 21 per week. The fee charged at Burnside College includes 22 meals per week, but at Boronia College only 23 meals per week are included in the fee. Helen Turner College has a similar fee structure to 24 College, but only 25 may live there.

Complete the following sentences with a NUMBER OR DATE from the passage. Write your answers in boxes 26-27 on your answer sheet.

Kormilda College had been run by the government until 26

30 years after its establishment, Kormilda College is hoped to welcomed  27 students.

Write the appropriate letter A-D in box 28 on your answer sheet.

From the list below, choose the best heading for Section B of the reading passage.

The following diagram shows how Kormilda College is organised.

Complete the diagram using information from the text.

Use NO MORE THAN THREE WORDS for each answer. 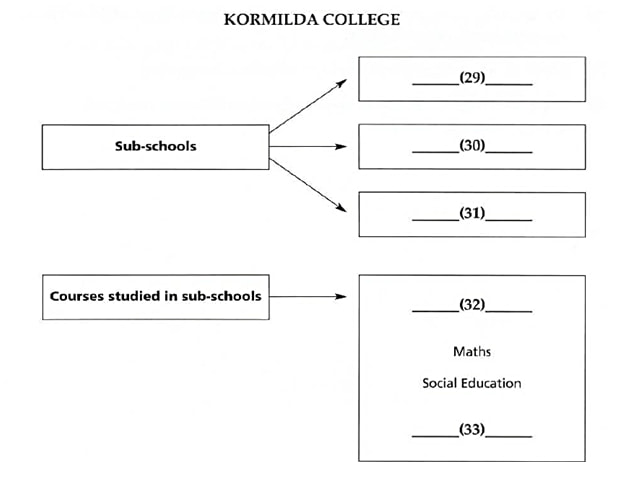 Read the passage about Kormilda College and look at the statements below. In boxes 34 – 40 on pour answer sheet write:

35 Some students travel from Arnhem Land to attend Kormilda College.

36 Students must study both the International Baccalaureate and Northern Territory courses.

38 The specialist curriculum Support Unit adapts school courses so the students can approach them more easily.

39 There are no oral traditional stories in Western communities.

40 The school helps the students make connections between Aboriginal and non-Aboriginal cultures.